Meet Vyommitra: ISRO’s half-humanoid will go to space before astronauts 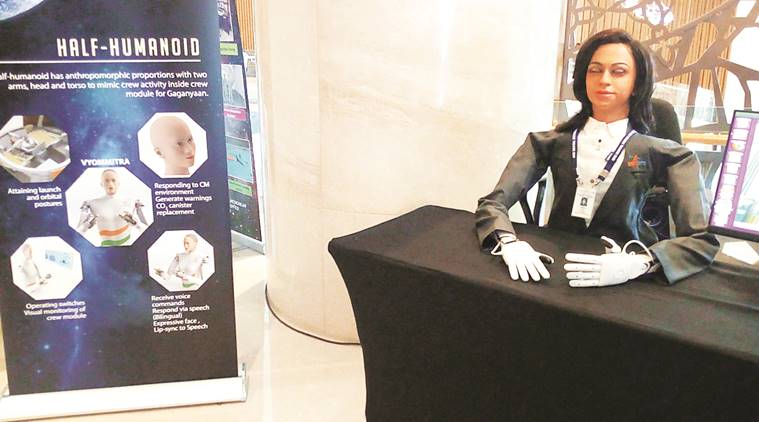 At an international conference on 'Human Spaceflight and Exploration' here on Wednesday, 'Vyommitra', a "humanoid medium" made by ISRO, was presented to the audience, Vyommitra (vyoma-space, mitra-friend) said: "Hello everyone I am Vyommitra, the prototype of the humanoid environment, made for the first unmanned Gaganyaan mission.

Based on artificial intelligence, a robotic system is being developed in a robotics laboratory situated at VSSC in Thiruvananthapuram for an unmanned flight of the ISRO GSLV III rocket in December 2020, which, together with a second unmanned flight in July 2021, It will serve as evidence of ISRO's preparation for its opening manned space mission, Gaganyaan, will be the goal by 2022 to mark 75 years of Indian independence.

Once fully developed, Vyommitra will be able to use equipment on board the spacecraft's crew module, such as safety mechanisms and switches, as well as receive and act on the commands sent from the ground stations.

“In Gaganyaan, many systems need to be tested before the flight: the human qualification of the propulsion modules, the escape system of the crew, the air fall tests ... We are aiming at the first unmanned mission soon. An important part of the work will be done this year, "he said.

With ISRO ready to be the first to attempt to send a manned mission into space without testing animals, the flight with Vyommitra will serve as evidence of the capabilities of the rocket system to take a human into space and back. Among the key parameters to be tested is the effectiveness of the crew module where the astronauts will fly, if their environment is conducive to human flight and the safety factor.

"Now we are moving rockets from the nature of launching a critical mission to that of critical security, where the human being comes into play in a rocket, where human life becomes more important," Somnath said.

ISRO has used a robotic and autonomous system for many of its missions, including the recent Chandrayaan-2 mission where the Vikram landing module was operating autonomously, using data stored in its systems, while attempting to make a soft landing on the surface of Moon.

Meanwhile, four pilots from the Indian Air Force have been chosen, from a group of 60 pilots, after a rigorous selection process in India and Russia, to be the first astronauts in Gaganyaan. “The selection of astronauts has been completed by a group of IAF test pilots and their generic test flight training will begin shortly. From then on, a specific mission training will be carried out in India using a large number of simulators and other facilities, "said the president of ISRO.

2 comments on “Meet Vyommitra: ISRO’s half-humanoid will go to space before astronauts”