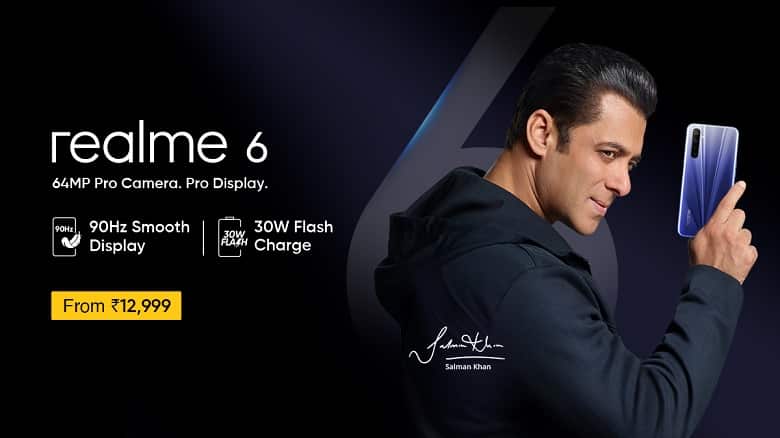 Today, Realme held its biggest presentation event to announce three of its most anticipated products: the Realme 6, 6 Pro and the Fitness Band in an empty arena. The event was also used to announce Realme Band as the company's first fitness tracker.

"A mid-budget 90 HZ display and first punch-hole smartphone in Realme series from Realme for common people."

In the event, Realme confirmed that Realme 6 is not the successor of the Realme 5 phone, but it came as the successor of Realme 5 Pro. The phones see Realme continue its momentum to offer high-end features at lower prices and to provide users with more devices with flagship experience.

Realme 6, Realme 6 Pro has been presented along with Realme Band, Realme's first fitness tracker. The company has also introduced a punch screen for the first time on any smartphone in the Realme series. As always, everyone seeks to be the best in their respective price segments.

Realme 6, entry-point to Realme's new mid-segment lineup, is powered by MediaTek's Helio G90T gaming-centric processor, while the Realme 6 Pro has arrived as the world's first smartphone with the 8 nm Snapdragon 720G mobile platform. The Realme 6 series offers users up to 8 GB of LPDDR4x RAM and up to 256 GB of UFS 2.1 storage.

Realme 6 phones are equipped with a side-mounted fingerprint reader. Regarding the appearance of Realme 6, the company says it flaunts a design inspired by a comet built with an optical coating process.

The design of Realme 6 Pro is inspired by thunder and lightning and is manufactured with a gradient offset printing process. The Gorilla Glass 5 protects the screens of both phones. The back cover of the Pro model also features the same reinforced glass. In addition, these phones come with a splash-resistant chassis.

The Realme 6 Pro features a dual-camera configuration in the front. It consists of a 16-megapixel Sony IMX471 main lens along with an ultra-wide 8-megapixel lens with a 105-degree field of view. Dual cameras for selfies support ultra-large selfies and ultra-large video recordings.

The front cameras of both phones are compatible with automatic HDR, AI Beauty, portrait mode, time-lapse, slow-motion video recording at 120 fps and Portrait Nightscape (to arrive through the subsequent OTA update).

The Android 10 operating system based on the Realme user interface comes preloaded on Realme 6 and Realme 6 Pro smartphones. The Realme 6 and 6 Pro are equipped with 4,300 mAh batteries that can be fully charged in just 60 minutes via 30W fast charging technology. To control power consumption, the smartphone can automatically switch between 60Hz and 90Hz refresh rates.