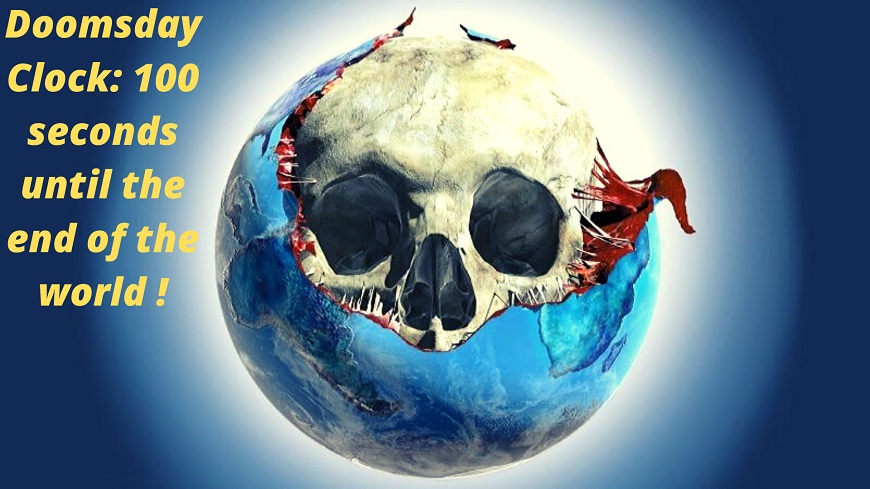 Doomsday Day clock 2020 now closer to midnight than ever in its history; The atomic scientists' bulletin cites the worsening of the nuclear threat, the lack of climate action and the increase in "cyber disinformation campaigns" on the clock hand in motion; Bulletin United by The Elders in Announcement on 23-Jan-2020.

Former California governor (USA), Jerry Brown, said that the symbol serves as an important admonisher of the existing threats to humanity.

Hands of the iconic "End of the World Clock" or  "Doomsday Clock 2020" has been moved only 100 seconds until midnight last month. That is the closest they have been to the last hour since its creation in 1947.

The Bulletin of the Science and Safety Board of Atomic Scientists, in consultation with the Board of Sponsors of the Bulletin, made the unprecedented decision to express the remaining time in seconds instead of minutes when the time was adjusted from 2 minutes to 100 seconds at midnight.

The time shown on the clock has approached midnight in three of the last four years. The last time he moved was in 2018, with a 30-second leap forward. It went from 2 1/2 minutes to midnight in 2017 from its previous setting of 3 minutes to midnight. There were no adjustments last year, but with the arrival of 2020, the Bulletin of Atomic Scientists observed new threats.

In addition to the two "simultaneous existential dangers" of nuclear war and climate change, the world now faces the threat multiplier of cyber information warfare.

The decision of moving clock hands closer to doomsday by 20 seconds was made in part as global leaders have allowed the international political infrastructure to contain this potential cyber threat to increase and escalate.

"There are 100 seconds left until midnight," said Rachel Bronson, president, and executive director of the Bulletin of Atomic Scientists. "Now we are expressing how the world is close to the devastation is in seconds, not hours or even minutes. It is very close to the Last Judgment Day that we have been in the history of the Last Judgment Day Clock. The World will face a true exigency: an absolutely unacceptable state of world biz that has eliminated any margin of error or additional delay. "

The 75th anniversary of the first edition of the Bulletin of Atomic Scientists will be in December 2020. It was originally a six-page black and white newsletter, which became a magazine. It was created in response to fears that the atomic bomb, which had been used against Japan in August 1945 to end World War II, would be "only the first of many dangerous gifts from the Pandora Modern Science Box."

The DoomsDay clock is "clock of the end of the world" is created to warns humanity and the world about how close we are to destroy our world with dangerous technologies of our own creation. It is a metaphor, a reminder of the dangers that we must address if we want to survive on the planet.

When the Last Judgment Clock was created in 1947, the greatest danger to humanity came from nuclear weapons, particularly from the prospect of the United States and the Soviet Union heading for a nuclear arms race. The Bulletin considered possible catastrophic interruptions due to climate change in its deliberations for the first time in 2007.

How Doomsday clock is created?

Co-editor Hyman Goldsmith asked artist Martyl Langsdorf to submit a design for the cover of the June 1947 edition of the Bulletin, the first issue published as a magazine instead of a newsletter. Martyl, as she was known professionally, was married to a physicist, Alexander Langsdorf, who worked on the Manhattan Project while at the University of Chicago.

At first, the artist considered using the uranium symbol. But while listening to the scientists who had worked at the Bomba, while passionately discussing the consequences of the new technology and their responsibility to inform the public, he felt his sense of urgency. Then he drew a clock to suggest that we didn't have much time left to control the atomic weapons.

Who decides what time Doomsday Clock should show?

In the early days, the newsletter editor Eugene Rabinowitch decided if the hand should move. When Rabinowitch died in 1973, the Science and Security Board of the Bulletin assumed the responsibility and has since met twice a year to discuss world events and reset the clock as necessary. The board is made up of scientists and other experts with a deep knowledge of nuclear technology and climate science, who often provide expert advice to governments and international agencies. They consult extensively with their colleagues in a variety of disciplines and also seek the opinions of the Board of Sponsors of the Bulletin, which includes 13 Nobel Prizes.

In the statement released on 23.01.2020 for the Doomsday Clock highlights 3 worsening factors:

“Public awareness about the climate crisis grew over the course of 2019, largely due to mass protests by young people around the world. However, government action on climate change is still far from meeting the challenge in question. At the UN climate meetings last year, national delegates delivered excellent speeches but presented few concrete plans to further limit carbon dioxide emissions that are altering Earth's climate. This limited political response came during a year when the effects of man-made climate change manifested in one of the warmest years recorded, extensive forest fires and the faster-than-expected melting of glacial ice. "

“In the nuclear field, national leaders have completed or undermined several important treaties and negotiations on arms control over the past year, creating an enabling environment for a renewed nuclear arms race, the proliferation of nuclear weapons and the reduction of barriers. to nuclear war. Political conflicts regarding nuclear programs in Iran and North Korea remain unresolved and, in any case, get worse. Cooperation between the United States and Russia in arms control and disarmament is almost non-existent. "

“The continuing corruption of the information ecosystem on which democracy and public decision-making depend has increased nuclear and climate threats. In the last year, many governments used cyber disinformation campaigns to sow distrust in institutions and among nations, undermining national and international efforts to promote peace and protect the planet. "

At the same time, the final judgment day's clock statement also identifies possible action steps to turn the clock hands back.
December 2020 marks the 75th anniversary of the first edition of the Bulletin of Atomic Scientists, initially a six-page black and white bulletin and then a magazine, created with the expectation that the atomic bomb would be "only the first of many dangers or risks as gifts of Pandora's box of recent science. "

Next Topic: Virtual Reality vs. Augmented Reality: What’s the Difference?