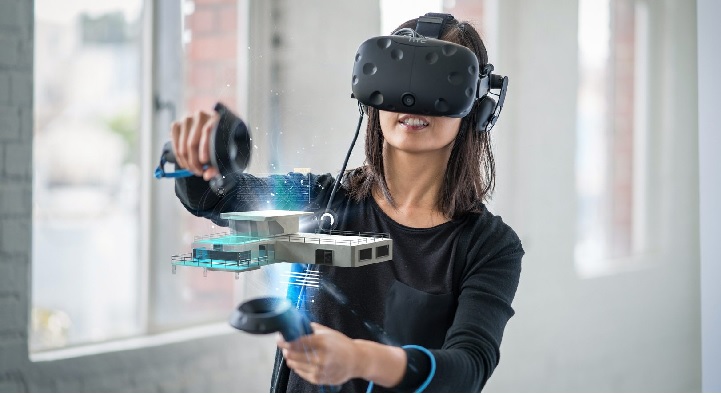 One of the biggest illusions in the world of augmented reality is the difference between augmented reality and virtual reality. Both are gaining a lot of mass user's attention and promising tremendous growth. So Let's find Virtual Reality vs. Augmented Reality: What's the Difference?

What is virtual reality?

Virtual reality (VR) is an artificial, machine-generated simulation or recreation of a real-life environment or situation. This immerses the user into feeling that they are already experiencing fake reality, mainly by stimulating their vision and hearing.

VR is typically achieved by wearing a headset such as Facebook's Oculus equipped with technology, and is prominently used in two different ways:

This is possible through a virtual reality coding language known as VRML (Virtual Reality Modeling Language), which can be used to create a series of images, and specify what type of interaction is possible for them.

What is augmented reality?

Augmented Reality (AR) is a modern technology that combines machine-generated enhancements with an existing reality to make it more meaningful through its ability to interact with it. AR has been developed in apps and is used on mobile devices to blend digital devices into the real world in such a way that they enhance each other, but can also be easily described as distinct.

AR technology is quickly becoming very popular nowadays. It is mainly used to display score overlays on telecasted sports games and 3D emails, photos, or text messages on mobile devices. The IT industry leaders are also using AR to do amazing and revolutionary stuff with holograms and motion-activated commands.

How are virtual reality and augmented reality similar?

Both augmented and virtual reality leverage the same types of technology, and they exist to provide an enhanced or rich experience to every user.

Both technologies enable experiences that are more expected and demanded entertainment purposes. Whereas in the past they used to imagine only a science fiction fantasy, fall under the user's control into new artificial worlds, and also acquire deeper layers of interaction with the real world. Leading tech firms are investing and developing new customization, making improvements, and releasing more and more products and apps that support these technologies for increasingly knowledgeable users.

Additionally, there is considerable potential to change the medical field landscape by making things like remote surgery a real possibility in both virtual and augmented realities. These techniques are already used for the treatment and treatment of psychiatric conditions such as post-traumatic stress disorder (PTSD).

How does augmented and virtual reality differ?

The objectives of AR and VR:

Augmented Reality enhances experiences by adding virtual components such as digital images, graphics or sensations as a new layer of interaction with the real world. In contrast, virtual reality creates its own reality that is entirely computer-generated and operated.

Method of implementation of AR and VR:

Virtual reality is usually implemented to the user via a head-mounted or handheld controller. This tool connects people to virtual reality and enables them to control and navigate their activities in an environment intended to mimic the real world.

Most VR headsets are connected to a computer (Oculus Rift) or gaming console (PlayStation VR), but stand-alone devices (Google Cardboard are the most popular). Most autonomous VR headsets work with smartphones - you insert a smartphone, wear a headset, and indulge in virtual reality.

e.g. of VR: Have you noticed a little cardboard icon when watching videos on YouTube? It enables 360-degree mode, which means you can wear a VR headset and enjoy fully in-depth videos. 360-degree videos can be considered a form of VR.

Augmented reality is increasingly being used on mobile devices such as laptops, smartphones, and tablets to change how the real world interacts with digital images and graphics.

e.g. of AR: If you have a modern smartphone, you can easily download the AR app and try this technique. However, there is another way to experience augmented reality - using specialized AR headsets such as Google Glass, digital content is displayed on the user's eyes on a smaller screen.

How do Augmented Reality and Virtual Reality work together?

It is not always virtual reality vs. augmented reality - they are not always independent of one another, in fact, they are more connected and create a deeper experience. For example, haptic feedback is a combination of vibration and sensation added to communication with graphics - which is considered an increase. However, it is usually used to make the experience even more touching in a virtual reality setting.

Virtual reality and augmented reality are great examples of experiences and interactions that have led to the immersive ground for entertainment and play, or the desire to add a new dimension of communication between digital devices and the real world. Whether alone or in combination, they undoubtedly open up the worlds - real and virtual alike.

Next Topic: Health risks of 5G, How Worried Should You Be About 5G radiations?