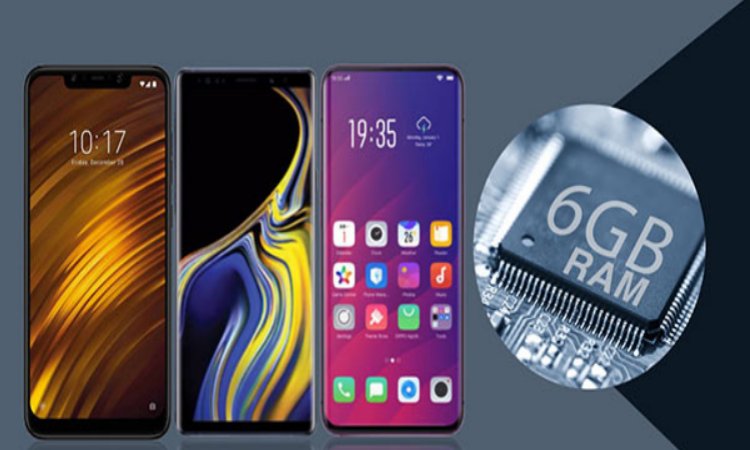 Consumers today want smartphones with higher RAM size, and for a good reason. Having a higher RAM size to complement faster processors ensures that smartphones run smoothly, without any hiccups. In this article, we discussed the seven best 6GB RAM mobiles that all come under Rs. 10,000. Each of them is unique in terms of what they bring to the table, and are worth exploring.

This 6 GB RAM mobile is one of the highest-rated ‘under Rs. 10,000’ phones according to consumers and tech experts. Its 6.53-inch FHD+ display is complimented very well by its MediaTek Helio G80 chipset, which allows you to multitask and play various graphic-intensive games.

One of the most stunning features of this phone is its provision of the P2i rust and splash protection cover that promises customers an additional durability time period. The smartphone also comes with a quad-rear camera setup comprising of 13MP + 8MP + 5MP + 2MP cameras that allow you to capture various photographs from different angles effortlessly.

It is rare for Xolo smartphones to often make the cut while discussing impressive smartphone models, but this phone truly is an underrated machine. Powered by a 2 GHz MTK Helio P22 octa-core processor, this phone allows you to execute tasks without any issues. Additionally, the phone also comes with a 3,200 mAh battery, face unlocking feature, and 6.22-inch HD+ Notch display.

According to certain reviews, its 16MP front camera clicks photographs that have a potent contrast ratio even at night. The phone houses 13MP + 5MP dual-rear cameras, which are supported by a well-lit LED flash.

Equipped with a 4,000 mAh battery that permits you to run heavy applications for several hours without dying, and a fast-charging facility that charges your phone quickly, this is yet another affordable phone that is worth looking into.

It comes with 13MP + 2MP dual-rear cameras, and 13MP + 2MP dual-front cameras accompanied by an LED flash. Coming to storage, the smartphone boasts of 64 GB internal memory, with an additional expandable limit of up to 256 GB by using a microSD card.

This 6 GB RAM mobile was intentionally priced lower so that consumers hailing from various backgrounds could enjoy the specifications of this phone. Its 16MP selfie camera and 3,060 mAh battery are very positively reviewed by Nokia fanatics.

From a physical point of view, it is very sleek owing to its 2.5D curved glass, and comes in three different colours -- black, blue and white. Finally, its dual Sight Display feature allows both front and rear cameras to function concurrently to capture breathtaking photographs.

This 6 GB RAM phone is reputed amongst consumers for its long-lasting specifications. Its monstrous 5,200 mAh battery and 18 W fast charging facility guarantees that you can use your phone for almost an entire day without worrying about the battery getting drained.

It is designed with narrow bezels, and an aspect ratio of 20.5:9 that makes it stand out in comparison to other affordable phones. The Infinix Hot 10 also comes with a Super Night mode that effortlessly lets you click photos, and edit them in environments that are poorly lit.

Finally, its 3D Face Beauty feature permits you to smoothen your skin, and enlarge your eyes without your photo looking artificial or unrealistic.

Protected by the Corning Gorilla Glass, this phone has been tested under extreme conditions to ensure that it does not get damaged easily. The phone’s face unlock feature and fingerprint scanner attributes have been designed in a way such that it is not capable of being easily hacked into.

Furthermore, the device comes with a powerful 5,000 mAh battery, and various connectivity options in terms of its Bluetooth, GPS, 3G and 4G facilities. It has a resolution of 1080 x 2246 pixels that make the graphics on your screen a lot more captivating, while you watch a video or play a game.

Finally, the smartphone houses 16MP + 5MP dual-rear cameras, and a 12 MP front camera that stabilizes the camera automatically when you try to capture an image.

In addition to the above smartphones, buying an Oppo mobile can also be considered the best option when it comes to purchasing budget phones.  We conclude the list with this 720 x 1600 pixilated powerhouse. This Oppo mobile comes with a 4,230 mAh battery and runs on the Android v.10 operating system. It also packs 32 GB internal storage, which can be expanded up to 256 GB by using a microSD card.

The smartphone only weighs 175 grams, and is considered to be one of the best lightweight Oppo mobile phones in the affordable segment. Oppo A15 comes with sensors that are inclusive of the standard fingerprint sensor, and ambient light sensor, along with supplementary sensors such as a proximity sensor and accelerometer.

Additionally, the phone also includes the classic face unlock feature, providing an additional layer of security. In terms of its camera specifications, it has a 5MP front camera, and a 13MP + 2MP + 2MP triple-rear camera array. These cameras are supportive of light settings that can be adjusted according to the environment you are in, so that you capture professional-looking photographs at all times.

Read Also: Why 5G Is Going To Revolutionise The World Today